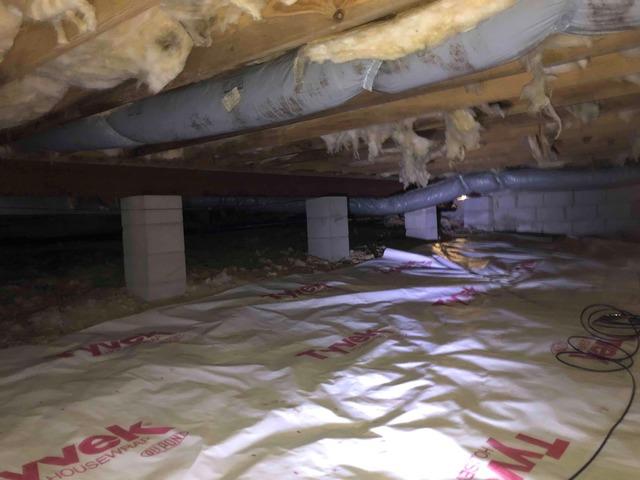 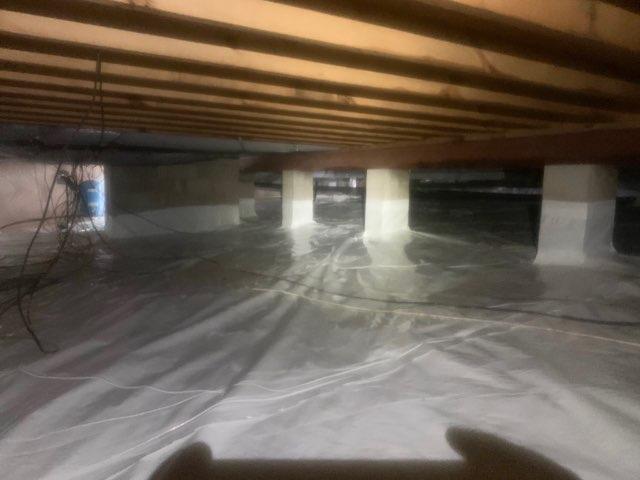 This homeowner contacted us with concerns about the joists in their crawl space. At the inspection, we found damaged and falling insulation, mold growing on the floor joists, and high humidity. To mitigate the problems under the home, and prevent them from reoccurring, we sealed the crawl space. The space was cleaned out, the mold was remediated, then we installed a new vapor barrier, sealed all the vents, rim & band, sill plate, and any holes through the foundation to outside. Next, we installed insulation on the foundation walls and installed a dehumidifier to regulate the relative humidity and protect the home from moisture damage. 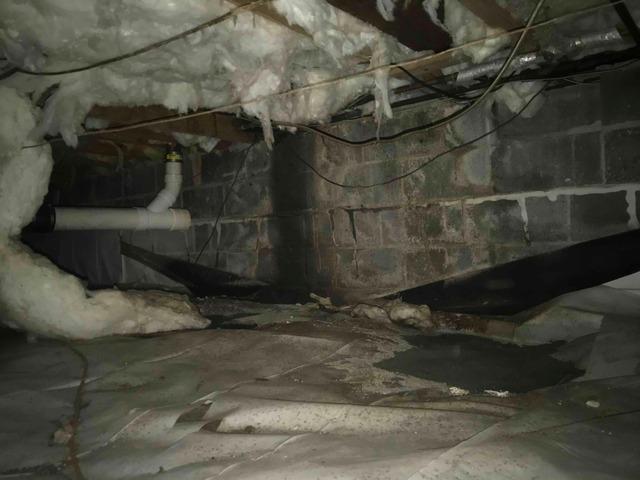 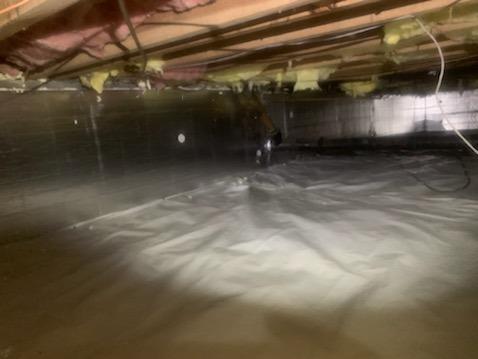 Before: The foundation walls of this crawl space are covered in efflorescence, which indicates that water infiltration has been present for this home. Efflorescence occurs when water from the outside seeps through these porous cinderblock walls, bringing all the inner salt and sediment of the blocks to the surface and leaving these stains and marks upon the walls. The water that finds its way into the crawl space can elevate the relative humidity, leading to wood rot, mold and mildew growth, and material damage.

After: The crawl space walls have now been insulated and sealed with Foamax foam board pieces. These 1½ inch boards act as air barriers and vapor retarders, protecting the crawl space from outside influence. They are mechanically fastened to the walls, while the cracks are sealed with can foam. A 2-inch viewing strip is left on the top for termite inspectors, and the bottom is attached to the 20-mil CleanSpace vapor barrier. The crawl space is much more protected from outside air and moisture. 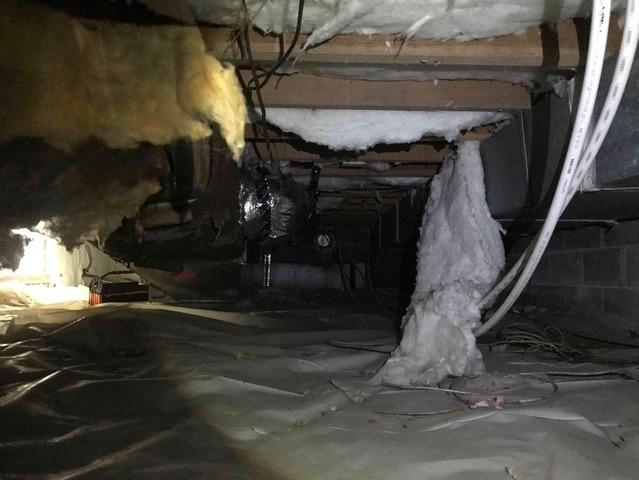 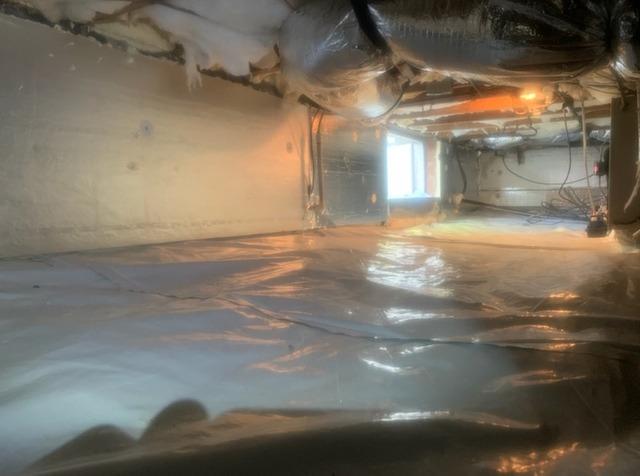 Before: The fiberglass insulation in this crawl space is beginning to fall out of the floor joists, suggesting that there is an excessive amount of water being absorbed by the insulation, making it too heavy to stay in place. Fiberglass acts as a sponge and will pull in moisture from the surrounding air, but the water droplets will pull apart the fibers, and gravity will pull it down in heavy chunks. If the fiberglass has paper-backing, there is a good chance that mold growth will occur, for paper-backed insulation is considered “mold candy” for how easy it is for mold to thrive on it.

After: The crawl space walls have been insulated using Foamax foam board pieces, which are 1½ inches thick, and act as an air barrier and vapor retarder against outside influence. The open vents lining these foundation walls have also been covered on the inside using precisely cut foam board pieces and sealed with can foam. With the walls protected with Foamax, and the dirt floor covered with a 20-mil CleanSpace vapor barrier, outside moisture, and air will find it difficult to penetrate the underbelly of this home. 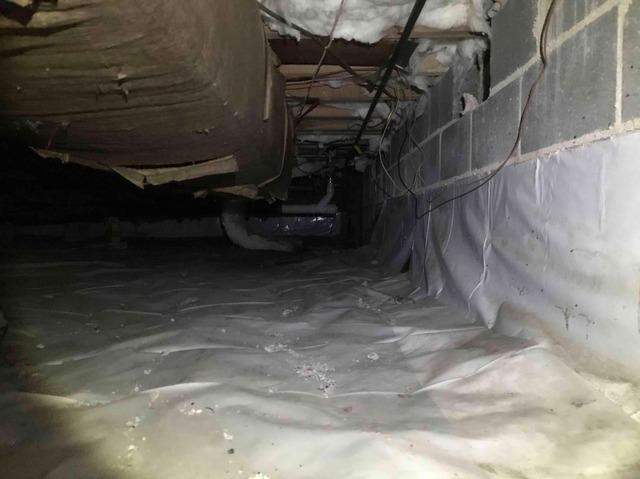 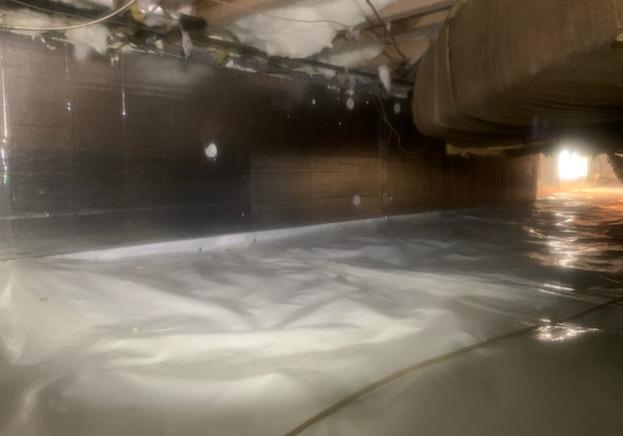 Before: The standard 6-mil vapor barrier shown in this crawl space is commonly found in Virginian crawl spaces but offers little-to-no usage when it comes to protecting the crawl from moisture damage. It is flimsy and easily torn by service people crawling on top of it while working. Holes form in this liner, and the dirt floor becomes exposed, allowing moisture from the earth to rise into the crawl space, increasing the relative humidity, and allowing puddles and mud to form. This creates a mess for homeowners and can allow mold and mildew to thrive on organic materials in this dark and damp environment.

After: A durable 20-mil vapor barrier, called CleanSpace, has been installed within this crawl space. It is a reinforced 7-layer polyethylene liner, much like a pool liner, which will protect the crawl space from moisture rising from the dirt flooring. The vapor barrier is finished with an antimicrobial, called UltraFresh, which will protect the liner from mold growth, although mold and mildew can still grow on any dust or dirt laying on top of the liner if the environment and relative humidity are not controlled. The CleanSpace gets wrapped around all piers and pillars and is fastened 6-8 inches above outside grade on the foundation walls, adding to the overall protection of outside air and moisture. 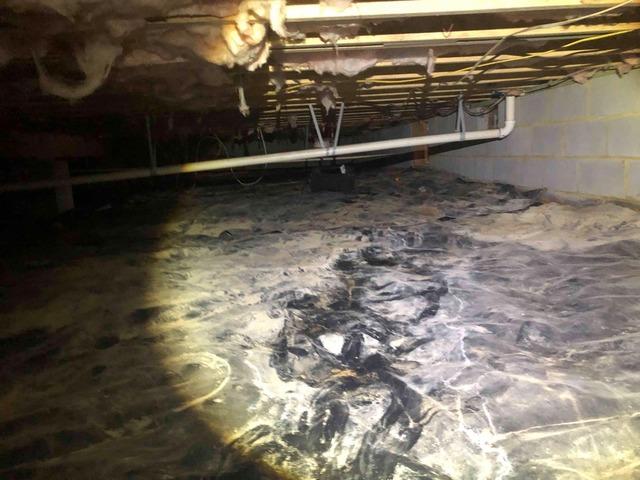 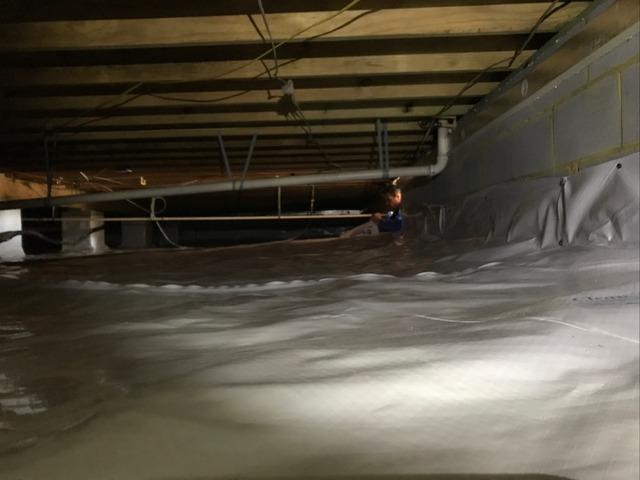 The ground cover in this crawl space was a 6-mil, a similar thickness to a trash bag, it is easily ripped and displaced. Because it is unsealed and has tears, the 6-mil ground cover allows moisture from the earth to affect the crawl space raising the relative humidity, damaging insulation, and causing microbial growth.

After removing the 6-mil, we installed a 20-mil heavy-duty vapor barrier called CleanSpace, and is similar to the thickness of a pool liner. CleanSpace has a built-in Antimicrobial called UltraFresh. When we install the vapor barrier, we overlap and seal all seams, seal the liner to the walls 6-8 inches above outside grade, and wrap and seal all piers. By sealing the CleanSpace at all of these points, we are able to isolate the crawl space from the earth's moisture.