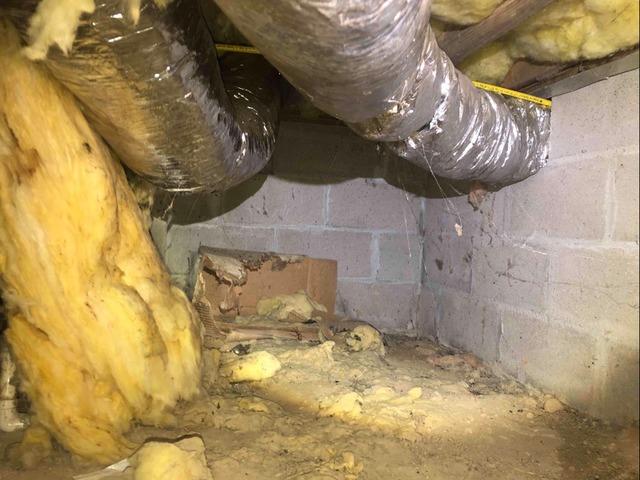 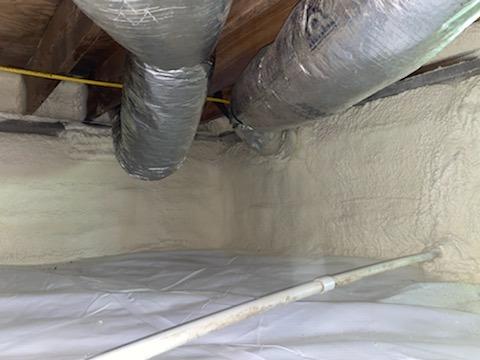 This Bruington, VA client contacted us about repairing moisture damage in their crawl space. Moisture had caused mold and mildew growth, was absorbed in the insulation which held it against the floor joists, the material began to delaminate and fall away from the floor.

All debris and insulation was removed from the crawl space, microbial growth was treated, the vents, sill plate, & rim band were sealed, the foundation walls were insulated with closed cell spray foam insulation and a dehumidifier was installed to control the relative humidity. The homeowners no longer need to worry about moisture damage in their crawl space and have the added benefit of warmer floors in the winter and reduced drafts in the home. 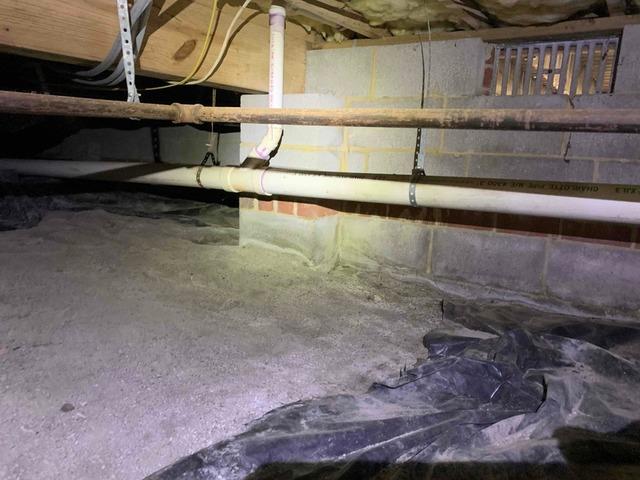 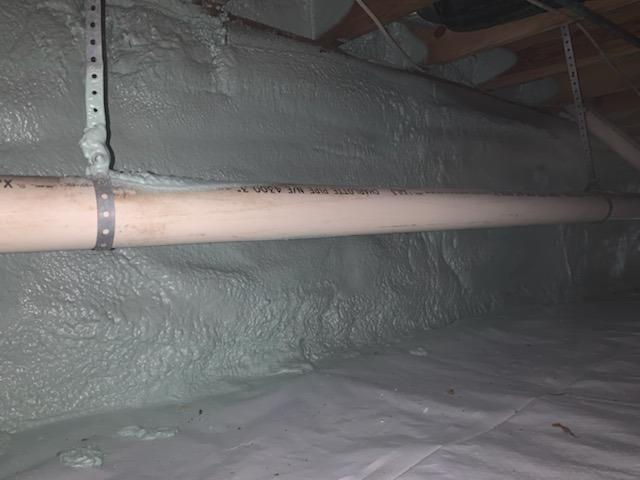 We installed about 1.5 inches of closed-cell spray foam over the foundation walls of this crawl space in Glen Allen, VA. At this thickness, the spray foam has an R10 value of insulation and acts as an air barrier and vapor retarder. We blocked out any open vents running along the crawl space wall, as these vents allow outside air and moisture to freely enter to crawl space, affecting the environment and relative humidity. With any insulation we install over the foundation walls, we always leave a 2-inch viewing strip at the top of the wall for termite inspectors. With these solutions in place, the crawl space is better protected from any outside influence penetrating through the foundation walls. 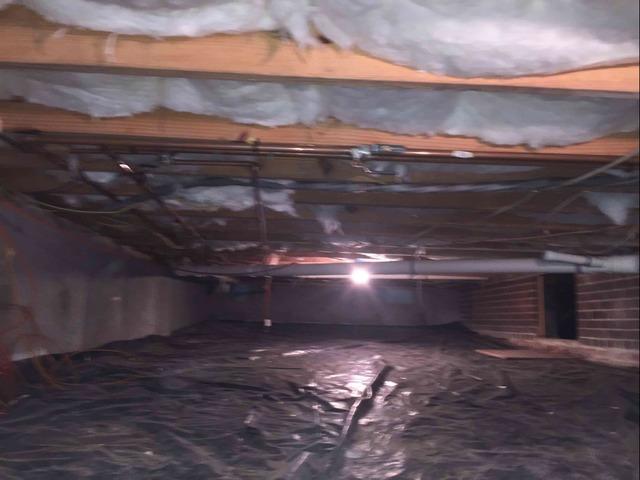 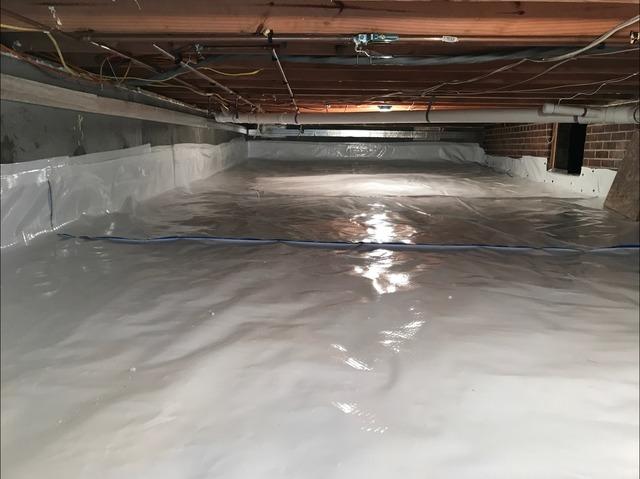 We met this homeowner at a home show, where they asked us to come to inspect their crawl space because they were interested in encapsulating it due to moisture and mildew-mold concerns. This section of the crawl space is under an addition. The vapor barrier is unsealed, allowing moisture to rise from the ground and contribute to high relative humidity. Microbial growth is beginning on the floor joists and the fiberglass insulation is beginning to sag and fall.

The old materials have been removed, vents sealed, and the sill plate and rim band have been sealed as well. The CleanSpace vapor barrier has been installed with all seams overlapped and sealed. The moisture barrier is also run up the walls 6-8 inches above outside grade. The walls are prepped for spray foam insulation to be applied.

Sealing and Insulating a Crawl Space in Henrico, VA 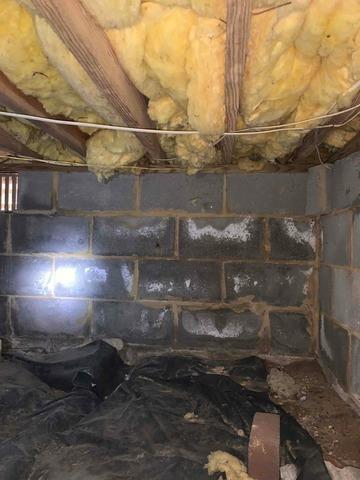 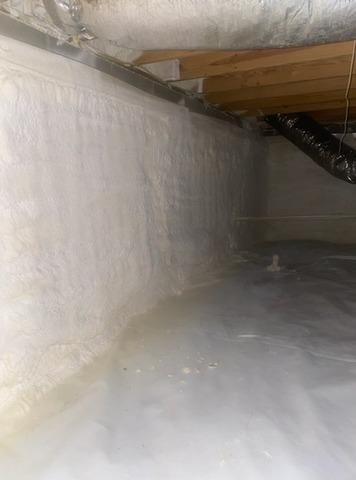 A homeowner in Henrico, Virginia called us out to insulate and seal their crawl space from any outside influence. We installed a heavy-duty CleanSpace vapor barrier over the dirt floor, wrapped it around all piers, and mechanically fastened it to the foundation walls. This will help to keep the earth's moisture from rising into the area and increasing the relative humidity. We also covered any open vents and applied a spray foam over the foundation walls, which at an inch and a half thick will act as an air barrier and vapor retarder. With the walls and dirt flooring sealed and insulated, the crawl space will be less affected by outside air and moisture. 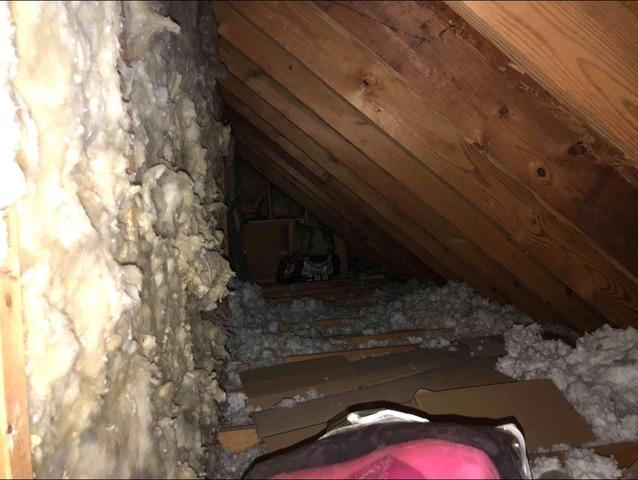 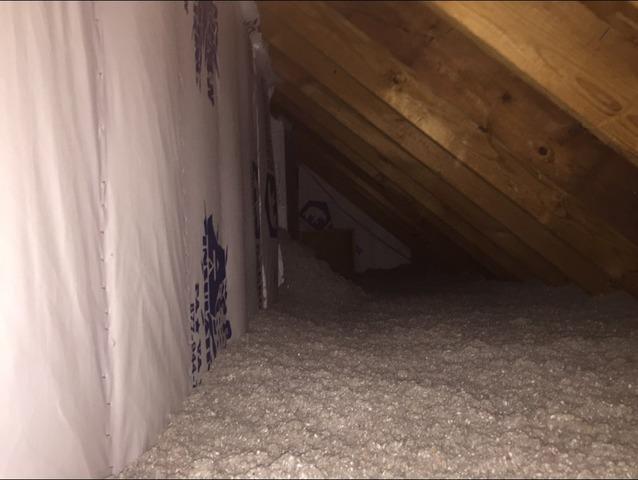 The conditioned space shared with these knee walls was sweltering in the summer and freezing in the winter due to sharing a wall with an unconditioned attic space. We installed insulation in the wall cavities and covered it with Tyvec to create an air barrier and better insulate the wall. We also installed insulation on the floor of the space to prevent air loss from the room below.