Testimonials for The Drying Co./ThermalTec

I had my crawl space done to help with the heat. Matt was great. He gave me an estimate months ago, but I didn't have the tax refund I thought I'd get to move forward. So we just did the work now. Matt was very thorough. He talked me through my options. I had several quotes but I went with Matt because he was confident and knew what he was doing!   The people who came out were real courteous. They did what they needed to quickly.      You all worked with my schedule. I'm very happy.
Justin of Ruther Glenn, VA
Wednesday, August 13th
Great Job! Very Nice!
Carol B. of Beaverdam, VA
Friday, November 15th
Tony Williams was great. Awesome would be a good word for him. He was a pleasure to meet, very experienced, thorough and he explained everything. The experience was good all the way around. The crews were great—I have nothing bad to say about them. The 3 man crew who did the liner worked non-stop until the job was done. Very polite. The 2 man crew, David and Moe, were very polite, personable, and at all times very pprofessional. I'd give them an "11." But you can oly go up to "10." They left eveything clean. I can already tell a difference in the humidity in the house, which was a reason why we had this encapsulation done. And yes, I will be a reference.
John K. of Montpelier, VA
Thursday, March 15th
I’ve noticed an improvement in the house and I would do it again. I really appreciate all the help. My sales rep. was excellent. He spent a lot of time with us late into the evening. He watched us eat dinner, but he wouldn't eat anything though. The crew was really-really-really good. Excellent.
Zachary B. of Glen Allen, VA
Wednesday, December 6th
Both of the installation teams exceeded my (our) expectations in that they were personable, informative, and professional, in addition to being highly skilled workmen. It felt more like family was performing the work. Thank you.
Doug M. of Mechanicsville, VA
Thursday, September 26th
Matt, Thanks for getting the work done. I wanted to say that the installers did an amazing job with everything. Thanks again!
Jerry B. of Mechanicsville, VA
Thursday, August 22nd
It's been much warmer in the house since you insulated--which is what we were aiming for. The guys did a great job and left my house in perfect condition.
David A. of Mechanicsville, VA
Thursday, March 27th
I would recommend you to family and friends. I picked you because our your company reputation, the sales representative and because you offered the best solutions. I'm happy with the crew and their cleanup.
Bruce W. of Mechanicsville, VA
Monday, May 14th
We are very pleased with the work that has been completed.  I have not crawled under there (and won't likely) but the plumber, the inspector, and a couple of men on staff have checked it out and all report the good work.  Thank you and your mechanics for making me look good at my job!   On a personal note, I worked in radio for 25+ years prior to coming to current employer.  Selling adertising was our product, however, I'm a firm believer that "word of mouth' is the best form of advertising.  I can tell you I will be 'advertisint' for The Drying Company.  You have ALL been great to work with.   Thank you Kevin, Tony, Sylvia, and everyone else involved in making the project go seamlessly for us.
Amy K. of Mechanicsville, VA
Wednesday, May 22nd
"Matt, I hope you're doing well. I wanted to share some good news and words of encouragement with you this morning. My HVAC company was out this morning to provide their fall inspection. It was the first time they've been out since the insulation work.  Before their employee went into the attic, I told him I'd had insulation work done since they were last here - just as an FYI.  After completing the inspection, the man came down from the attic, looked at me for a minute, then said "That's some of the best work I've seen."  He went on to compliment the detail of the work as well as the quality.  If that's not enough, I got my electric bill for July (first full month since the work).  Last July I used 979 kw.  This July, 548 kw. And, keep in mind, last year I was working; this year I'm home all day.  I'll be interested to see what the August bill shows. I felt confident I made good decisions to have the insulation work done, and done by your company.  But, it's really good to see and hear confirmation of those good decisions.  Just wanted you to know, I've appreciated your support and guidance during this whole process!  Please extend this good news and my thanks to the men who did the insulation work, so they know their work makes a difference and is appreciated and valued by their clients.  Take care,"
Brenda R. of Mechanicsville, VA
Tuesday, August 13th
Everette and Mike D. went above and beyond expectations. "They made Lemonade out of lemons." They did an exceptional job. Worked really hard and made sure everything was done to my liking. I will recommend The Drying Company to everyone.
Alan R. of Manakin Sabot, VA
Wednesday, July 11th
Daniel was very professional and did a fantastic job!
David S. of Henrico, VA
Friday, January 3rd

Thank you, The guys who did the work were very polite and courteous.  Everyone has been very helpful. Vernice
Vernice B. of Henrico, VA
Monday, April 29th

Dear Mr. Tetreault: Your company just completed to projects in our crawl space, a “conditioned crawl space” and a joist repair. I don’t often write letters to a company’s leadership commending their employees. With your company, I will make an exception. Our first contact with your company was with Mohammed Saeed, one of your salespeople. He answered all our questions…and we had a lot of questions. In fact, he made a second visit and amended some of his design based on our concerns. He was able to explain his design as well as the process and was very flexible in working with what we already had in place in our crawl space. The next person I had contact with was Sylvia Gatewood who explained in detail the basics of what would happen and told us exactly how the job was scheduled. I called her many times. She was always polite, efficient and always very prompt in returning my calls. The first crew that showed up was the trenching crew headed by Eric Pass. I’m not sure I’ve ever seen people work as hard as Caleb, Alex, and Eric, all three of them never seemed to stop. Not only that, but Eric seems to know something about EVERYTHING! The next crew was the crawl space crew, Adel, Omar and Mohammed II. These three people were amazing to watch as the ripped out the old insulation and tied it up in huge bundles. Kevin Reis then showed up and had the same crew finish up the job. Keven is exemplary; his standards and his attitude are amazing. Everyone I’ve had contact with has been extremely professional, hard working and really good at communicating. It was refreshing to see not only how the crew members got along with each other but how the different crews seemed to respect the work of the others. I never heard one employee ever criticize the other. They all seemed to just want to do a good job. It really seemed to be that simple……to work hard and make the homeowner happy. In fact, when Kevin was under the house with the second crew, Mohammed [Saeed] came by (to have me sign the papers for the second project). While he was here, he (Mohammed) went under the house and helped them finish up the job. I understood later that Kevin showed him something about insulating the area under the bay windows so Mohammed can incorporate that into his future designs and estimates. I’m sure no company is perfect, but your company has some of the best people I’ve run across with the best work ethic and level of professionalism I’ve just about ever seen. I’m sure no one ever commends you, just your employees, and they deserve their accolades, but corporate culture starts at the top. I admire what you’ve managed to build……….a team, a real team. Thank for the work and for the finished product!!
Rachel S. of Henrico, VA
Thursday, March 14th
The crew did a great job!  Very professional.  They cleaned up after themselves, extremely well.  They were very unobtrusive.
Elizabeth F. of Henrico, VA
Friday, March 8th
Total testimonials : 165 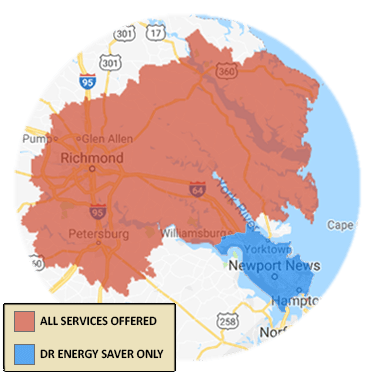