This Hartfield, VA homeowner reached out to us when they noticed that a wall of their basement was getting wet after heavy rains. It was beginning to damage the drywall and had some microbial growth. The homeowner wanted a solution that would allow them to refinish the wall and not have to worry about repeating the project in the future.

The home had a fairly large basement, and the damage was limited to one end of the basement, so the homeowner chose just to treat that end of the basement. We trenched the back wall and several feet on either side. We then laid in stone and the WaterGuard Drainage System and installed CleanSpace on the walls. The CleanSpace will feed any water that enters through the block foundation wall down to the WaterGuard System and contains an antimicrobial called UltraFresh. The WaterGuard System is paved over with concrete and feeds any collected water to the SuperSump. The SuperSump is a basin and 1/3 horsepower pump with airtight lid and WaterWatch alarm. The sump will pump water out of the basement and to a spot on the property designated by the homeowner. The WaterGuard and CleanSpace system is a minimally invasive solution that allows the homeowner to refinish the basement and have peace of mind that they won’t have to do it again. We always advise homeowners who only choose to treat affected areas that water follows the path of least resistance, and sometimes only treating one spot will lead to issues in an area that was not previously affected. The homeowner has had success with this project and is able to enjoy their basement again. 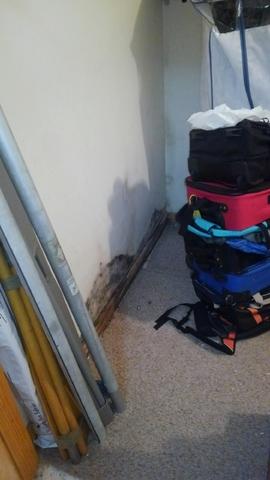