This Hanover, VA homeowner wanted to improve the insulation in their attic. They were experiencing uneven temperatures in their home and had high energy bills. At our inspection, we found that the attic had several major air leakage points, and was under-insulated. Building code requires that no building materials touch a chimney, creating a tunnel from the crawl space to the attic for air to escape. In addition, there were several unsealed can lights, and plumbing and electrical penetrations. These air gaps allow air that the homeowner paid to heat and cool to escape out of the top of the home and unconditioned outside air to be sucked in at the bottom.

This home, like many others, has ductwork in the vented attic. This essentially leaves your ductwork outside. Allowing the extreme temperatures of the attic, freezing in the winter and sweltering in the summer, to cool duct lines trying to pump warm air to your rooms, the reverse is true in the summer. This resulted in the home being hard to heat and cool and wear and tear on the HVAC equipment, as it ran more trying to heat and cool the home. The lack of insulation was also allowing heat to radiate into the rooms below in the summer, heating them up and making them even harder to cool. In the winter, the cold ceiling was cooling rising warm conditioned air, causing it to drop and the cycle to repeat in a process called convective looping.

To help make this home more comfortable and energy-efficient, we began by air sealing can lights with Rockwool Can Light covers, Rockwool is a fire retardant material so it can safely endure the heat put off by can lights, unlike fiberglass insulation which creates a fire hazard if it is pushed up against the insulation. Typically, we find a large space around the recessed light that is uninsulated for this reason. We then air sealed the gap around the chimney to close off the express lane for air to escape. Around the duck work, we built a dam to protect the unit and the decking allowing access for maintenance from any new insulation spilling on to the decking.

We installed PV’s (proper vents) to ensure proper ventilation in the attic, so the new insulation would not block the soffit vents. Finally, we blew in a fresh blanket of R-38 cellulose insulation on top of the existing fiberglass insulation. The cellulose product used by The Drying Co. is 85% recycled materials such as newspaper, and 15% new material. It also contains a borate that helps deter pests. Cellulose is more effective in the attic than the existing fiberglass insulation because the smaller particles of insulation nest better than the fibers of batt insulation allowing less air to travel through the material.

Properly sealing off major leakage points and insulating to an R-38 helps reduce the amount of air flooding out of the home and into the unconditioned attic and reduces how much influence the attic has over the temperature of the rooms below it. This makes the home more comfortable for the homeowners, reducing energy bills, and eliminating uneven temperatures throughout the home. 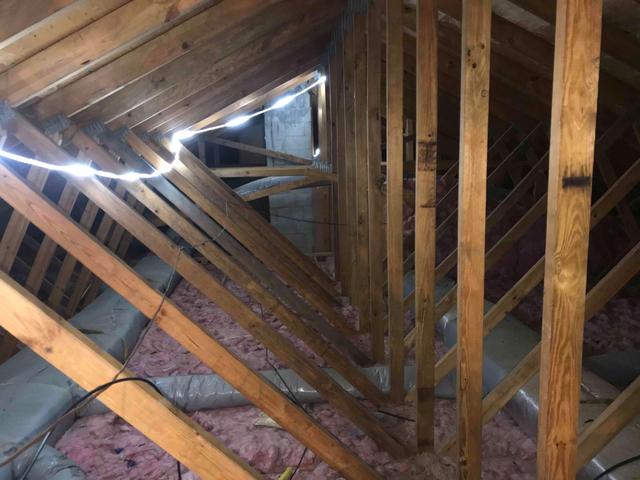 Photo Gallery: Common Energy Loss Problems in Attics
Back to Previous Page
Back to Case Studies