This homeowner in Colonial Beach, Virginia was having many issues with water infiltration in the basement of their home. They called The Drying Company to help them, and we sent out one of our professional Home Performance Advisors to evaluate their situation and come up with the most efficient solutions to their problems.

Upon inspection, we found that their foundation walls bore unmistakable signs of water infiltration. Efflorescence was visible along the basement walls, which happens when moisture forces through the porous cinderblock or brick walls, bringing along with it the salts and sediments from within those blocks to the surface. A powdery, chalky substance forms on the interior of the walls when this occurs.

We also noticed residue from water infiltration on the basement floor along the foundation walls, floods and leaks can happen during large rainstorms, but can also occur when your water heater or pipes leak. If the relative humidity reaches over 60% during warm temperatures, mold and mildew can begin to grow within the basement, and musty odors can rise into the floors above and irritate homeowners.

Our Home Performance Advisor carefully drew up a plan to help resolve these moisture issues and prevent water infiltration from affecting the basement of this home.

The first step we would take would be to clear the perimeter of the basement walls from all items and belongings. Once we had enough space, we created a six-to-eight-inch trench along the perimeter of the basement floor. We filled the trench with drainage rock and installed a Water Guard drainage system within the drainage rocks. The Water Guard system will help to collect any water leakage and drive it towards an installed sump pump, while the rocks help to filter

A TripleSafe sump pump was installed in connection with the Water Guard system, containing a 1/3 hp cast-iron Zoeller pump, a second 1/2 hp Zoeller pump should the first become overwhelmed, a battery backup system, and a WaterWatch alarm which will signal should the pumps fail, or the water exceeds their limits. The WaterGuard system delivers all the water collected and shoots it to the sump pump, which will then drain it out and away from the home to a predetermined location in the yard.

A 20-mil CleanSpace vapor barrier was placed along the basement walls, six to eight inches above outside grade. This heavy-duty liner will help to prevent any moisture infiltration through the porous foundation walls from entering the basement and affecting the relative humidity and environment. It guides any water leaking down to the Water Guard system, which carries it onto the sump pump.

If you are experiencing moisture damage or intense flooding during rainstorms in your basement, then call us at 757-566-8622 to schedule your free estimate with one of our experienced Home Performance Advisors. We will help you to keep the outside, outside! 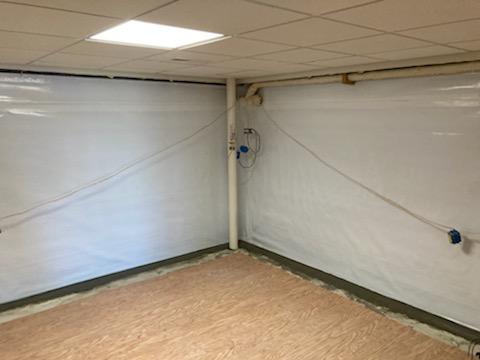 The walls of the basement have been covered with a CleanSpace liner to help protect the basement and guide any moisture seeping through the walls to the Water Guard drainage system. 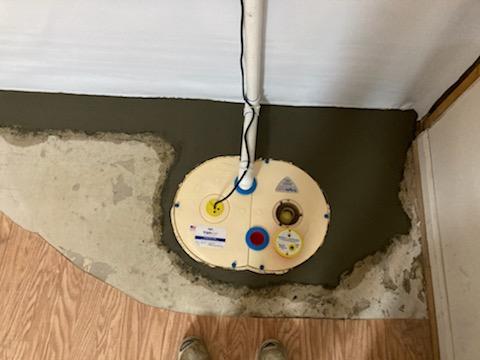 A TripleSafe sump system was installed in connection with the Water Guard drainage system to drain away any collected water. 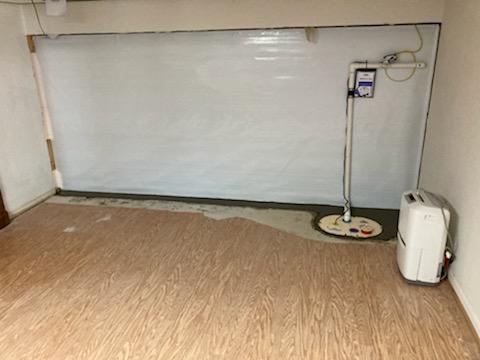 Any water collected by the Water Guard and TripleSafe sump will be drained out via hose line to a predetermined location on the home's property.