This homeowner in Hampton called us out to inspect their crawl space and to provide them with proposals for encapsulating and sealing it off from any outside influence. We sent out a Home Performance Advisor to investigate the situation and we found that there were multiple issues within the crawl space including mold growth, damp fiberglass insulation, efflorescence, and muddy puddles. We drew up a number of services and solutions to help combat the outside moisture influence. 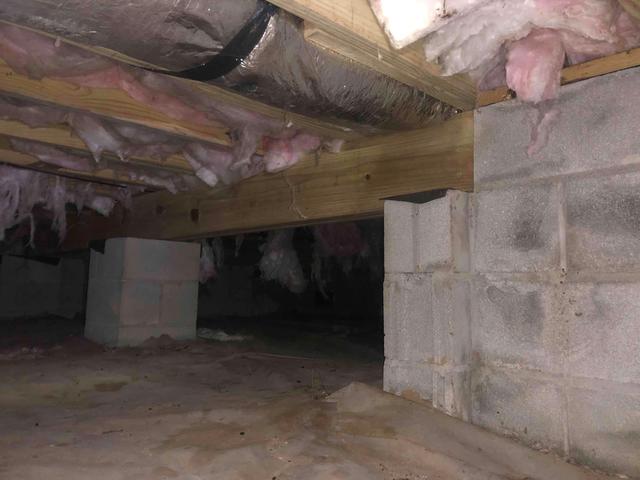 Mold and mildew had formed along many of the wooden floor joists of the crawl space. This growth can occur on organic material when the relative humidity reaches over 60% during warmer temperatures. The mold spores and musty odors can often rise into the floors above and negatively affect those with allergies and asthma. 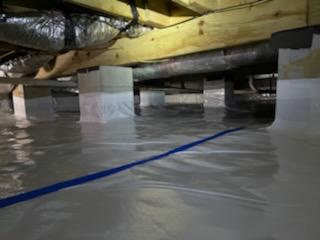 We took an antimicrobial called Shockwave and applied it to any affected floor joists and material. Shockwave is an EPA-registered disinfectant and sanitizer that eliminates mold growth but does not remove any staining left behind from it. It is also worth noting that mold can reform if the relative humidity and temperatures are not controlled. 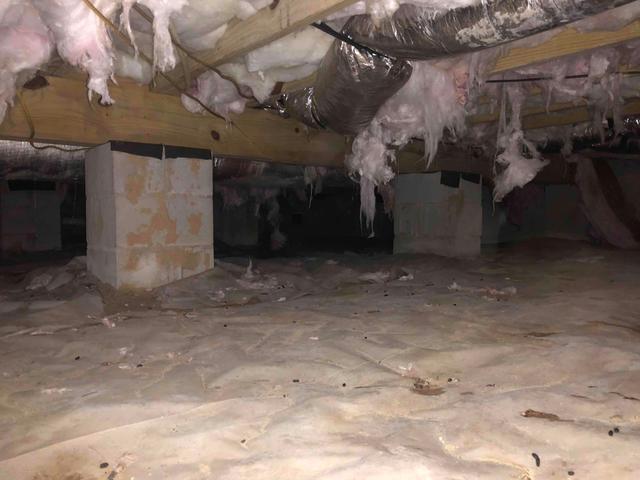 Holes and Gaps in Existing Liner

The existing liner in this crawl space had many gaps and holes in it, which was allowing the earth's moisture to rise into the crawl space and raise the relative humidity. The increased relative humidity leads to damp fiberglass insulation, mold growth, and condensation. The muddy and rugged flooring also makes it difficult and messy for service persons to navigate around the crawl space. 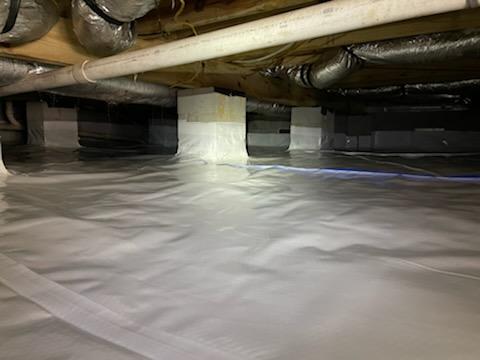 We removed all the damp fiberglass insulation from the floor joists as well as the flimsy and torn liner. We then installed a durable 20-mil CleanSpace vapor barrier over the dirt floors of the crawl space. This heavy-duty 7-layer polyethylene vapor barrier covers the entire floor, is wrapped around all piers, sealed with vinyl tape, and mechanically fastened to the foundation walls six to eight inches above outside grade. This will help to protect the crawl space from the earth's rising moisture, and it gives the crawl space a clean and bright aesthetic. 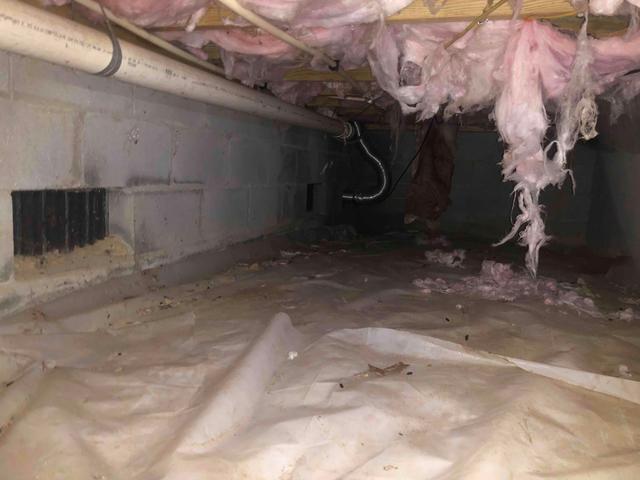 The foundation walls of this crawl space were made with porous cinderblocks, and efflorescence was visible on those blocks. This tells us that the outside moisture was seeping through these walls, bringing along with it the inner salts and sediments and creating this chalky, powdery substance on the walls. There were also open vents lining these walls that were allowing the outside air and moisture to freely enter the crawl space and affect the environment and relative humidity. 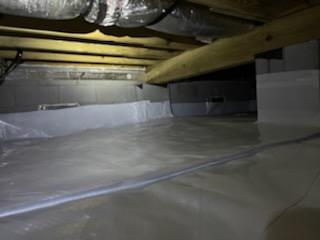 The homeowners did not move forward with insulating their foundation walls. Our proposed solutions would either be to use an R-10 value of closed-cell spray foam, or our Foamax foam board insulation. Both of these solutions would not only insulate the crawl space, but they would act as an air barrier and vapor retarder, blocking off the outside influence. The open vents lining these walls were replaced with SmartVents, which are able to fully close and assist in preventing floods from entering the crawl space.