A homeowner in New Kent gave us a call because they were experiencing musty odors within their home and were curious about sealing encapsulating crawl spaces. Oftentimes, musty odors are a sign of mold or mildew growth, so we sent out one of our Home Performance Advisors to investigate their crawl space's situation. Upon inspection, we found that there was indeed mold growth along some of the wooden floor joists. The crawl space floor was littered with debris and old materials, and many sections of the dirt floor remained exposed, allowing the earth's moisture to rise into the area and affect the relative humidity and environment. We also inspected the foundation walls, which were mostly made with porous cinderblocks and lined with open vents, allowing the outside air and moisture to enter the crawl space and further disrupt the environment. There was clearly a major moisture problem within this crawl space, and so our advisor proposed a variety of solutions and services to help mitigate the outside influence and to protect the crawl space from moisture. 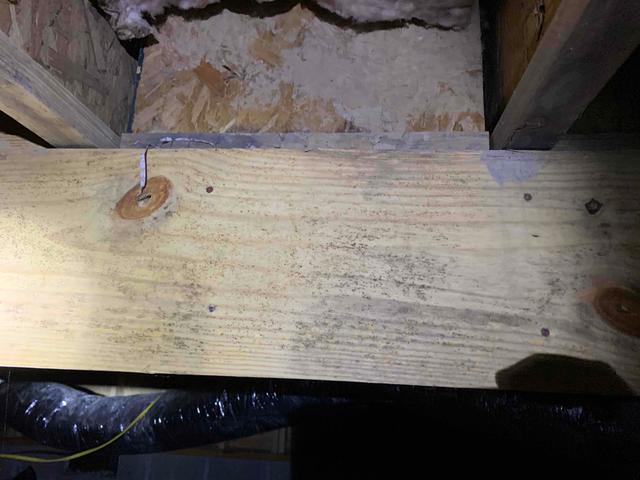 There were many areas of the crawl space where mold and mildew had formed on the organic materials, such as the wooden floor joists. Mold growth in the crawl space can occur during warmer temperatures when the relative humidity reaches over 60%. The musty odors can rise into the home above and irritate those with allergies and asthma. 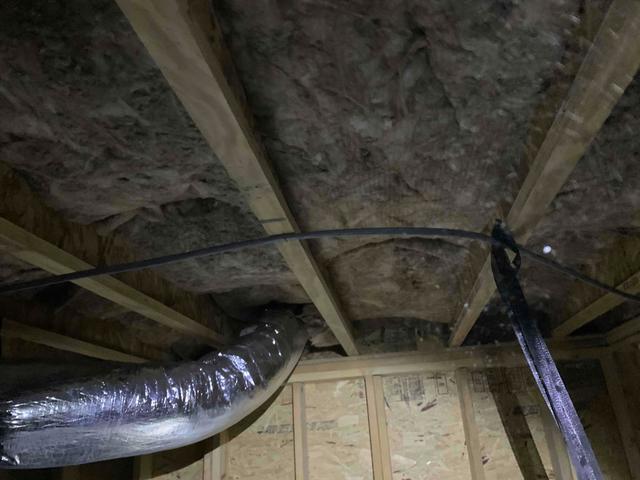 Many of the fiberglass batts within the floor joists were damp and dirty. Some were even beginning to sag or fall out of place. Fiberglass batts will often absorb excessive moisture within the crawl space. The water droplets pull apart the fine glass fibers and the insulation batts can fall to the floor in large, wet chunks. 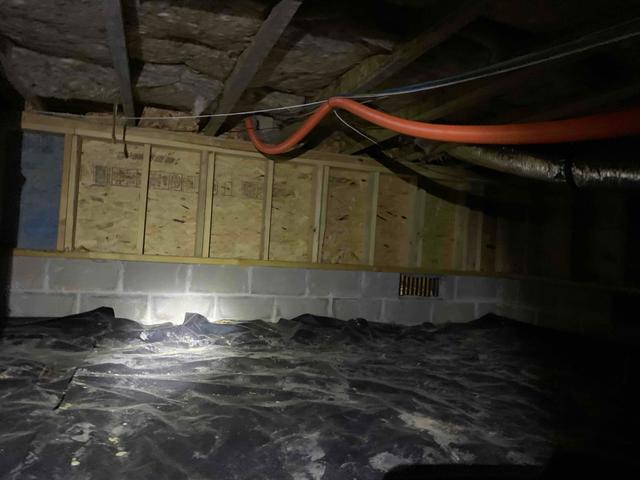 The 6-mill liner originally installed over the dirt flooring of this crawl space is unsealed and ripped in several places. This exposes the dirt floor, allowing the earth's moisture to rise into the crawl space, raising the relative humidity. Many areas of the crawl space floor were also covered with debris and materials, making it difficult for service persons to maneuver. 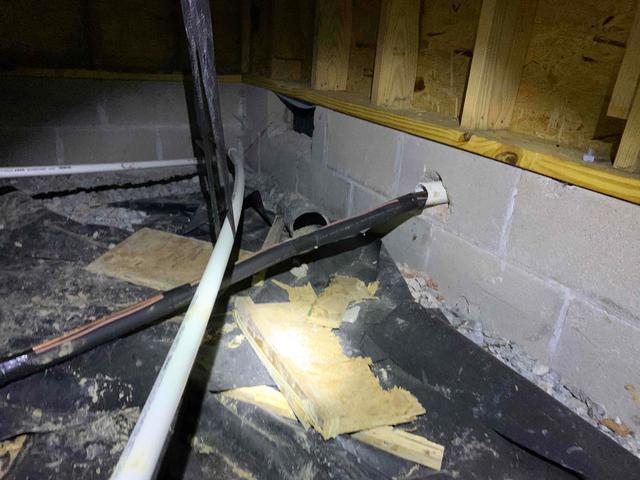 The walls of this crawl space were made with porous cinderblocks, which means that moisture is able to seep through them and raise the relative humidity. The open vents lining these walls are also allowing the outside air and moisture to freely enter and further disrupt the environment of the crawl space. 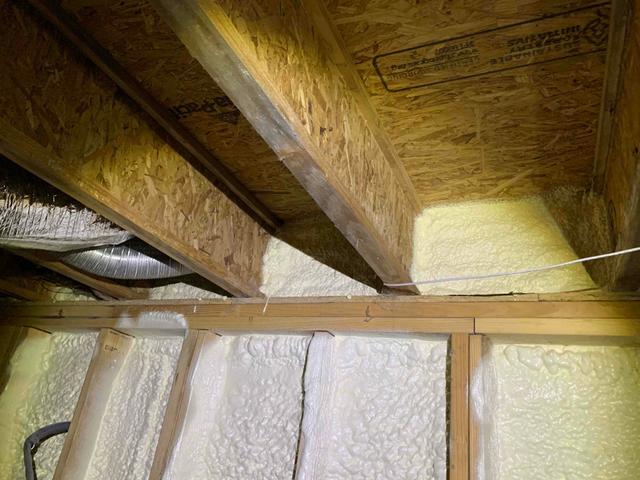 We removed all existing fiberglass batts from the floor joists of this crawl space, for the homeowner had planned to move the insulation to the foundation walls, as we had proposed. We would also advise using our antimicrobial solutions to eliminate mold and mildew growth on all the floor joists, however, the homeowners chose not to. 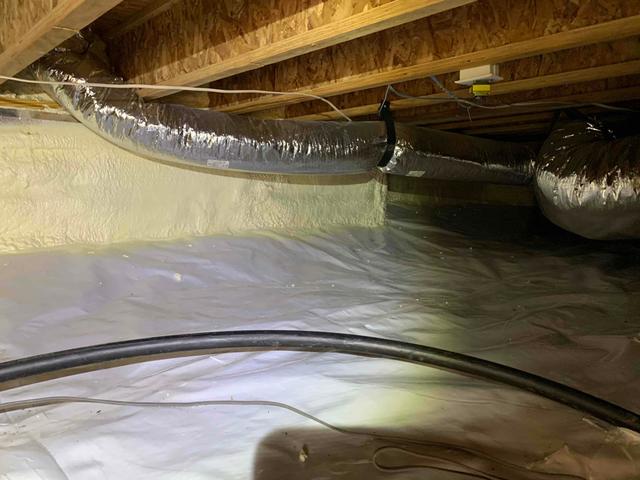 A durable 10-mil vapor barrier, called CleanSpace, was installed over the dirt flooring of the crawl space. It is wrapped around all piers, sealed with vinyl tape, and mechanically fastened to the foundation walls six to eight inches above outside grade. The CleanSpace is designed and installed to help protect the crawl space from any moisture rising from the earth and affecting the relative humidity. 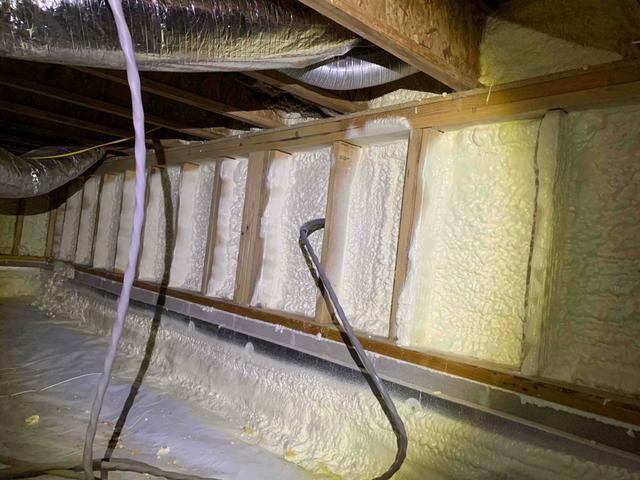 An inch and a half thick coat of closed-cell spray foam was applied over the foundation walls of the crawl space. At an R-10 value, this spray foam not only insulates the crawl space but acts as an air barrier and vapor retarder. The open vents lining these walls are also internally blocked off and sprayed over, shutting off the flow of infiltrating air and moisture. 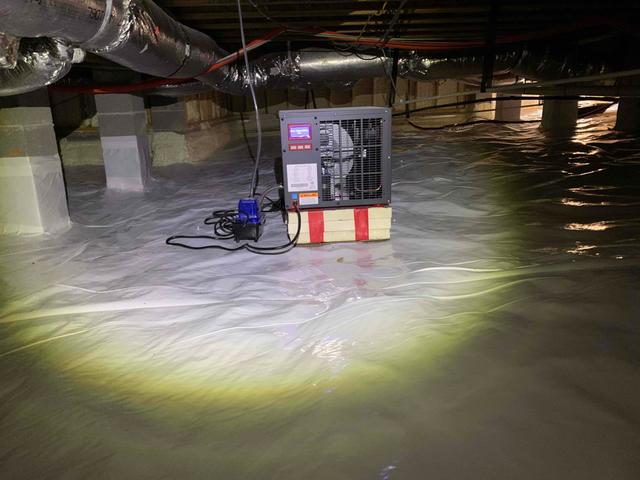 A high-performance dehumidifier, called SaniDry Sedona, was installed in connection to a LittleGiant condensation pump. This system will help regulate and control the relative humidity and temperature of the crawl space, as well as circulate dry air around the space. A hygrometer is given to the homeowner to view the current temperature and relative humidity of their crawl space at any time.