This homeowner in Williamsburg, VA called us out to inspect their crawl space for excessive moisture damage. We sent out a Home Performance Advisor to investigate the situation and found that there was quite an abundance of mold growth on many of the floor joists, as well as the fiberglass insulation batts. Many areas of the dirt floor remained exposed and uncovered by the existing vapor barrier and large puddles had formed on top of the liner. Efflorescence and other evidence of water infiltration were visible along the foundation walls, while open vents lining these walls remained uncovered, allowing the outside air and moisture to freely enter and affect the relative humidity and environment. Our advisor proposed to the homeowner a variety of solutions and services to help protect this crawl space from further outside influence. 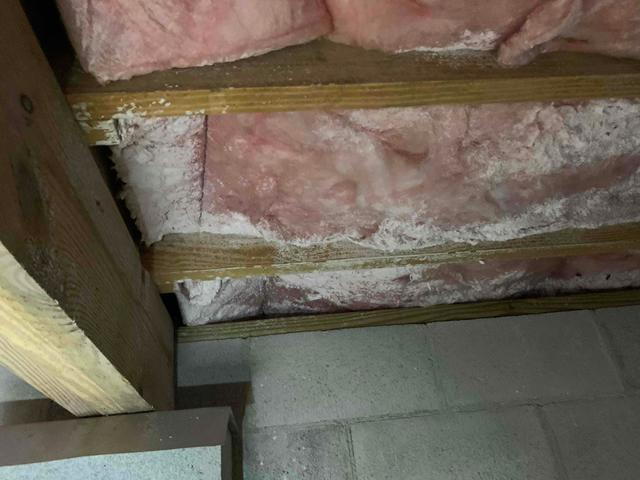 Mold and mildew had formed along many of the floor joists of this crawl space, as well as the fiberglass insulation batts. This can occur on any organic materials when the relative humidity reaches over 60% during warmer temperatures. Musty odors and mold spores can find their way up into the home and irritate those with allergies and asthma. 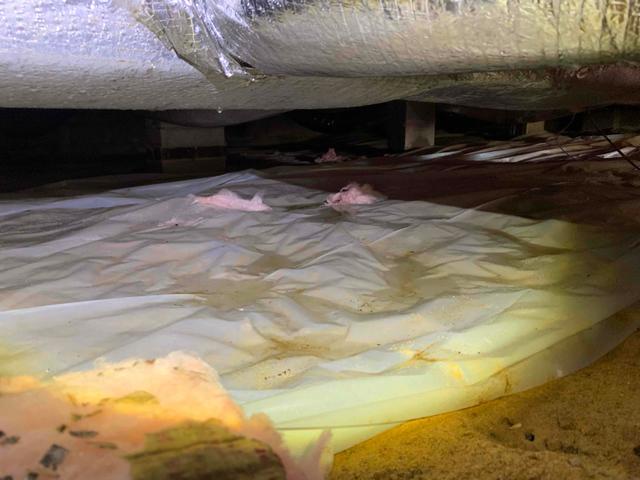 Many areas of the dirt flooring were left exposed, allowing the earth's moisture to rise into the crawl space and raise the relative humidity. Because of this, many damp chunks of the fiberglass batts have fallen to the ground after absorbing much of the excessive moisture. When the relative humidity reaches 100%, condensation begins to occur, and this has caused many puddles to form within the crawl space. 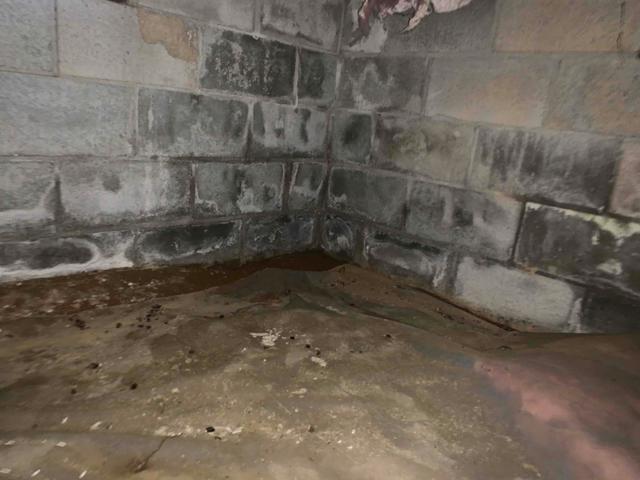 The chalky, powdery substance formed along the foundation walls is called efflorescence. This occurs when moisture seeps through the porous cinderblock walls, bringing along with it the inner salts and sediments to the surface. The infiltrating water then adds to the elevated relative humidity. 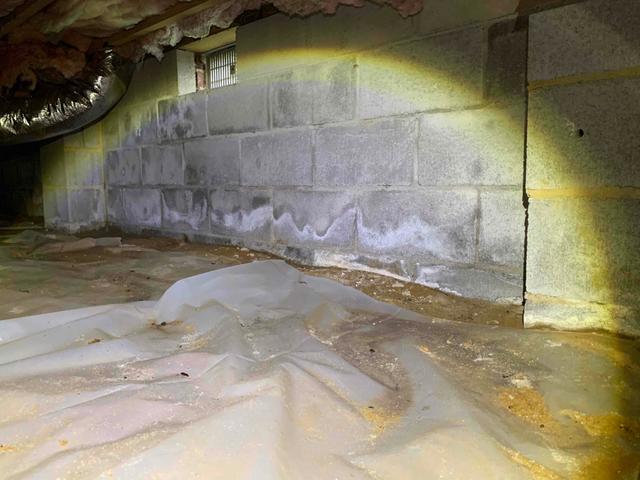 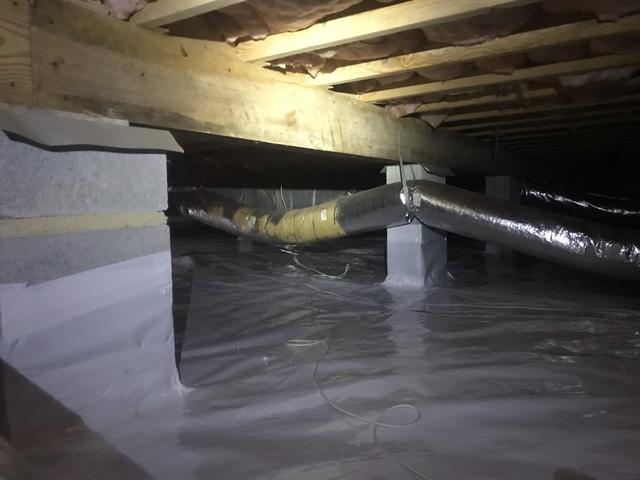 The homeowners did not choose to act on our proposal for mold remediation of the floor joists, but we did remove the moldy fiberglass insulation and replaced them with R19 unfaced fiberglass batts. Even if the homeowners requested mold remediation, it is important to note that the mold and mildew could reform if the relative humidity and temperature are not regulated in the crawl space. 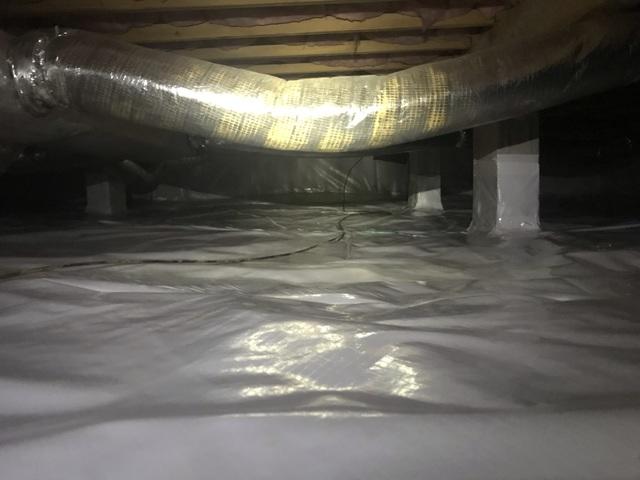 We installed a durable 10-mil vapor barrier, called, CleanSpace Light, over the dirt flooring of this crawl space. It is wrapped around all piers, sealed with vinyl tape, and mechanically fastened to the foundation walls at least six to eight inches above outside grade. This vapor barrier will help to protect the crawl space from any moisture rising from the earth. 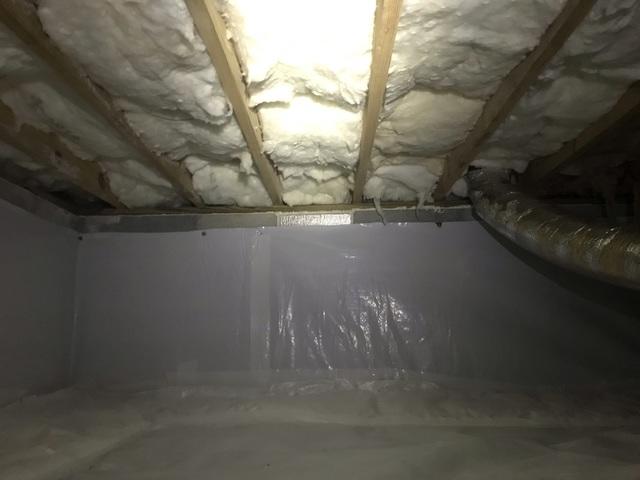 The open vents lining the foundation walls were allowing the outside air and moisture to freely enter the crawl space. We internally blocked these open vents using custom-fit foamboard pieces, which will mitigate the amount of outside influence on the crawl space's relative humidity and environment. 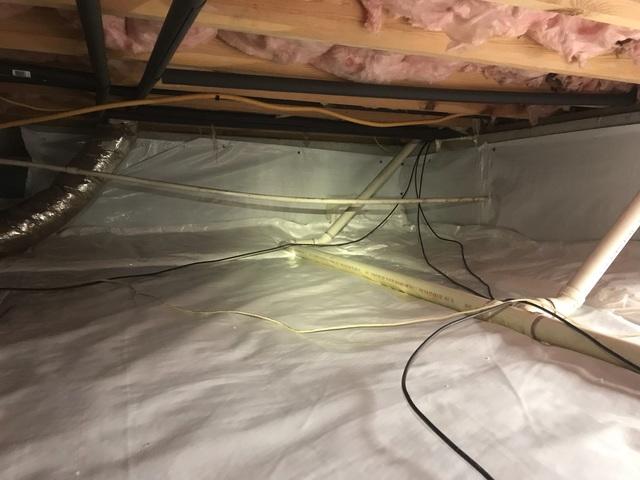