With concerns about the insulation in their crawl space, this client in Henrico, VA wanted to know what their options were.
During his inspection, Brad found that open vents had been allowing moisture and humidity to flood into the crawl space. The vapor barrier wasn't fully covering the ground and had many gaps and tears allowing moisture from the earth to rise into the space.
The high relative humidity and excess moisture have begun to damage the insulation. Fiberglass absorbs moisture like a kitchen sponge becoming heavier and falling away from the floors. When it's damp, its insulating properties are also diminished and the fibers are damaged causing them to pull away from themselves. Ultimate the insulation falls to the ground.
In the insulation, Brad also found signs of mice and critters creating some cozy nests. Critters love to make a home in the fiberglass insulation in a crawl space, it helps keep them warm, the space is dark and damp, and safe, and that insulation is making a nice warm blanket for them too!
All this damage to the insulation ultimately means in the home, our client is noticing cold floors and drafts in the winter. About 50% of the air inside the home comes from the crawl space, so there is also going to impact on indoor air quality.
Moisture causes further damage in the crawl space such as mold and mildew growth on the floor joists. Inside the home, this could mean musty odors, and high humidity, and can even irritate those who have asthma and allergies.
Our client's goal is to address the insulation and make the home more comfortable, they also don't want to do this project again in a few years.

In this case, our homeowner decided to encapsulate their crawl space.

Omar and Safaa will begin by cleaning the crawl space out of all the nasty, wet insulation, vapor barrier, and any debris.

Next, they are going to treat the wood substructure with an antimicrobial to kill the mold and mildew growth.

Finally, Omar and Safaa will block and seal all vents from inside the crawl space and air seal at the sill plate and any penetrations through the foundation wall to outside.

Now the crawl space is ready to be insulated. Daniel and Mike will Insulate the foundation walls with Closed-cell spray foam insulation. The material is applied, leaving a viewing strip at the top of the block wall for termite inspections. They will also seal the rim band, a major culprit of air infiltration and drafts for homeowners. This crawl space shares some framed wall spaces with the living space, so they will also apply spray foam to these spaces.

Next, they will install a SaniDry Sedona dehumidifier. This unit will help control the relative humidity in the crawl space and prevent moisture build-up and future damage to the crawl space.

Finally, Daniel and Mike will install an interior friction-fit crawl space door to insulate and air seal behind the exterior door and install an Everlast exterior door that will not rust, rot, or warp.

This system will solve the homeowner's concerns about their insulation for good. If they had chosen to replace the fiberglass and do nothing else, they would likely be repeating the project again in a few years or less because moisture would continue to build up in the crawl space and cause damage to the "new" fiberglass. Instead, the encapsulation system keeps as much outside moisture and air from entering the crawl space as possible and with the dehumidifier controls the environment preventing a buildup of moisture and humidity. Insulating from the foundation walls instead of the floor extends the thermal envelope of the home and coupled with air sealing is helping to keep the floors warmer, reduce drafts, improve indoor air quality, and even save the homeowners on their energy bills. 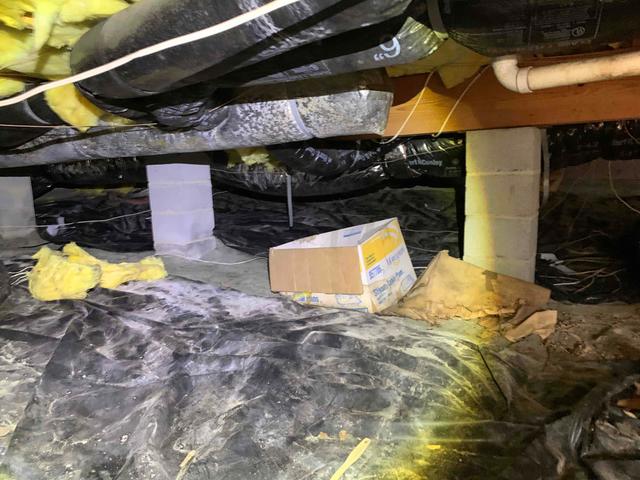 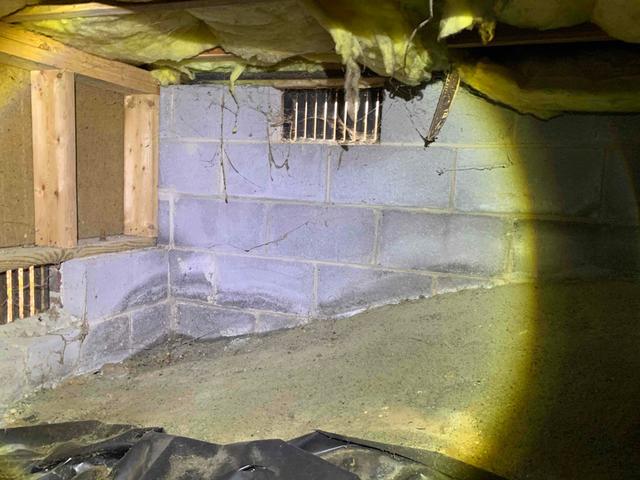 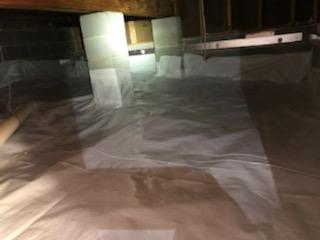 Photo Gallery: Crawl Space Insulation in Henrico, VA
Back to Previous Page
Back to Case Studies