This Moon, VA homeowner was referred to us when they were having problems with an encapsulation that was previously installed in their home by another company. The current system had water collecting on top of the vapor barrier. The collecting water has nowhere to drain, so it sits on top of the liner, evaporating and rising. The moisture is absorbed by the wood substructure and with moderate temperatures, mold begins to grow.

For this homeowner, we began by putting in a temporary sump pump to remove the water sitting on top of the liner so our crews could work safely. Then we cut the vapor barrier at the perimeter of the crawl space and pulled it back so that we could trench along the foundation wall and install a drainage system and SuperSump pump. The drain lines will collect the water, feeding it to the sump pump, which will carry it away from the home to a spot designated on the property by the homeowner.

Next, we installed CleanSpace to repair the openings we made and run the liner up the wall. The vents had been previously blocked, however, the rim & band was left unsealed, so we applied spray foam to the rim and band, to stop outside air from entering the crawl space.

The final step was installing a dehumidifier. The SaniDry Sedona is a unit specifically designed to be effective in crawl spaces and basements. It cuts on when the relative humidity hits the preset 55%, we want to keep it below 60%. It then removes moisture and filters the air, then circulates dry air throughout the crawl space. We also provided the homeowner with a wireless hygrometer. The Hygrometer allows the homeowners to monitor the temperature and humidity in their crawl space from inside the home.

The homeowners no longer need to worry about water collecting on top of their encapsulation systems, causing the same mold and wood rot problems they had before. The fully encapsulated crawl space will ensure under the home stays dry, lower energy bills, and reduced drafts and cold floors.

Do you have water in your crawl space? Call your local experts at The Drying Co. Our Home Performance Advisors will discuss your concerns and goals with you, do a thorough inspection, take pictures and review their findings with you, and work with you to develop the right plan for you and your home. 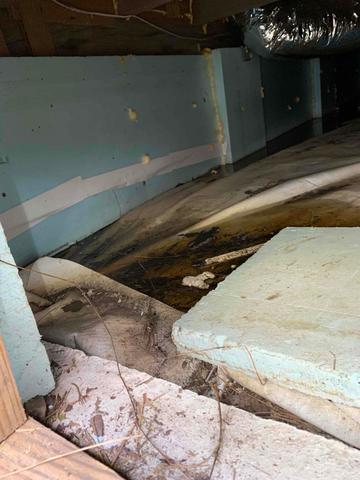 Water inside the crawl space door. 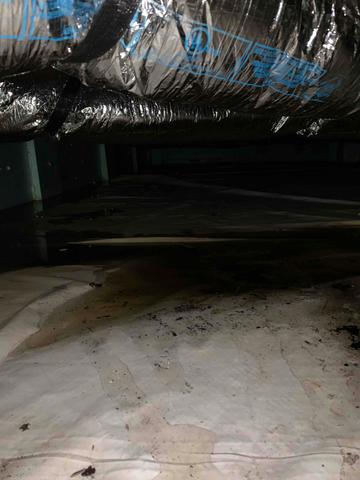 Huge puddles of water sit on top of the liner, evaporating into the crawl space and raising the relative humidity.