Testimonials for The Drying Co./ThermalTec 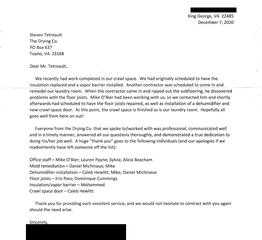 “Dear Mr. Tetreault,                 We recently had work completed in our crawl space. We had originally scheduled to have the insulation replaced and a vapor barrier installed. Another contractor was scheduled to come in and remodel our laundry room. When the contractor came in and ripped out the subflooring, he discovered problems with the floor joists. Mike O’Bier had been working with us, so we contacted him and shortly afterward had scheduled to have the floor joists replaced, as well as installation of a dehumidifier and new crawl space door. At that point, the crawl space is finished as is our laundry room. Hopefully, all goes well from here on out!                 Everyone from The Drying Co. that we spoke to/worked with was professional, communicated well and in a timely manner, answered all our questions thoroughly, and demonstrated a true dedication to doing his/her job well. A huge “thank you” goes to the following individuals (and our apologies if we inadvertently have left someone off the list): Office Staff – Mike O’Bier, Lauren Payne, Silvia, Alicia Beacham Mold Remediation – Daniel Michinaux, Mike Dehumidifier Installation – Caleb Hewitt, Mike, Daniel Michinaux Floor Joists – Eric Pass, Dominique Cummings Insulation/Vapor Barrier – Mohammed Crawl Space Door – Caleb Hewitt                 Thank you for providing such an excellent service, and we would not hesitate to contract with you again should the need arise.”
Harry B. of King George, VA
Monday, December 14th
From sitting down with Mohamed through the final phase of the encapsulation, everything was great!
Wade H. of Aylett, VA
Monday, July 13th
Eric has been such a thorough professional through all of the work done in our home. I definitely would like him to be recognized and commended in any way that he can be. Plans have been made for me to schedule a follow-up appointment for him to come back in April to check the levels before we have the cracks repaired and the walls repainted. We are very appreciative of the work completed and are waiting for the plumbing to be strapped; scheduled for today at some point. Happy Holidays to you and your family!
Cheryl W. of Glen Allen, VA
Thursday, December 17th
Both of the installation teams exceeded my (our) expectations in that they were personable, informative, and professional, in addition to being highly skilled workmen. It felt more like family was performing the work. Thank you.
Doug M. of Mechanicsville, VA
Thursday, September 26th
We are very pleased with the work that has been completed.  I have not crawled under there (and won't likely) but the plumber, the inspector, and a couple of men on staff have checked it out and all report the good work.  Thank you and your mechanics for making me look good at my job!   On a personal note, I worked in radio for 25+ years prior to coming to current employer.  Selling adertising was our product, however, I'm a firm believer that "word of mouth' is the best form of advertising.  I can tell you I will be 'advertisint' for The Drying Company.  You have ALL been great to work with.   Thank you Kevin, Tony, Sylvia, and everyone else involved in making the project go seamlessly for us.
Amy K. of Mechanicsville, VA
Wednesday, May 22nd
I had a very positive experience with the Drying Company. The estimator, Ed Clarke, conducted a very thorough inspection of our house and was professional and very informative. He followed up promptly with a price quote detailing his oral proposal. The scheduler was very detailed and informative as to what and when the work would be done. The installers arrived and completed the work within estimated time frames, and were very polite and professional. And, the company helped us set up "same as cash" financing for the project. Thank you, Drying Company.
Geoffrey F. of Heathsville, VA
Monday, April 25th
Daniel was very professional and did a fantastic job!
David S. of Henrico, VA
Friday, January 3rd

Dear Mr. Tetreault: Your company just completed to projects in our crawl space, a “conditioned crawl space” and a joist repair. I don’t often write letters to a company’s leadership commending their employees. With your company, I will make an exception. Our first contact with your company was with Mohammed Saeed, one of your salespeople. He answered all our questions…and we had a lot of questions. In fact, he made a second visit and amended some of his design based on our concerns. He was able to explain his design as well as the process and was very flexible in working with what we already had in place in our crawl space. The next person I had contact with was Sylvia Gatewood who explained in detail the basics of what would happen and told us exactly how the job was scheduled. I called her many times. She was always polite, efficient and always very prompt in returning my calls. The first crew that showed up was the trenching crew headed by Eric Pass. I’m not sure I’ve ever seen people work as hard as Caleb, Alex, and Eric, all three of them never seemed to stop. Not only that, but Eric seems to know something about EVERYTHING! The next crew was the crawl space crew, Adel, Omar and Mohammed II. These three people were amazing to watch as the ripped out the old insulation and tied it up in huge bundles. Kevin Reis then showed up and had the same crew finish up the job. Keven is exemplary; his standards and his attitude are amazing. Everyone I’ve had contact with has been extremely professional, hard working and really good at communicating. It was refreshing to see not only how the crew members got along with each other but how the different crews seemed to respect the work of the others. I never heard one employee ever criticize the other. They all seemed to just want to do a good job. It really seemed to be that simple……to work hard and make the homeowner happy. In fact, when Kevin was under the house with the second crew, Mohammed [Saeed] came by (to have me sign the papers for the second project). While he was here, he (Mohammed) went under the house and helped them finish up the job. I understood later that Kevin showed him something about insulating the area under the bay windows so Mohammed can incorporate that into his future designs and estimates. I’m sure no company is perfect, but your company has some of the best people I’ve run across with the best work ethic and level of professionalism I’ve just about ever seen. I’m sure no one ever commends you, just your employees, and they deserve their accolades, but corporate culture starts at the top. I admire what you’ve managed to build……….a team, a real team. Thank for the work and for the finished product!!
Rachel S. of Henrico, VA
Thursday, March 14th
Did a great job. Very pleasant and cooperative! Did a great job of cleaning up and leaving everything perfect.
Gerald M. of Henrico, VA
Tuesday, November 9th
Eric Pass was professional and answered all of my questions. He and the team did a great job with our sump pump and digging job. Despite all the work, the basement was always clean and well kept. Our materials were taken care of that we store in the space and the guys laid ample plastic sheeting out for us. Crew worked very hard to get a large job done in a week. I am happy with work and clean up. Thanks!
Diane G. of Richmond, VA
Wednesday, March 14th
I am so excited to have had such a good contact with TDC! Everette and Kevin were absolutely amazing. They made us feel safe and secure every step of the way. We were thrilled to have your Field Manager come out to check on her crew, too. She was able to clarify a lot of draft issues we had on the first floor of our home, and we ended up going with a great option in our crawl space as a result of her, Everette and Kevin's diligent work. The men did a phenomenal job and we are so happy to have found this company! Definitely will refer.
Deb K. of Richmond, VA
Thursday, December 21st
Chad,  I just wanted to commend Alex, the young man who inspected the crawl space initially and told me he would 'make it right'. He did! Having a young man with that degree of integrity and pride in what he does is a tremendous asset to your company.  Sylvia was also wonderful listening to the history of the job and my concerns and the prompt action the Drying Company took to correct the situation has restored my faith in your company.  Thank you,
Jan N. of Richmond, VA
Thursday, July 11th
Great work! Everything looks super! They did an awesome job (cleaning up)!
Matthew B. of Richmond, VA
Friday, November 29th
Hard working, efficient.
Matt W. of Richmond, VA
Wednesday, February 12th
On the 3 technicians that completed the work: I really appreciate the attention to detail and professionalism displayed. As a consumer, it is extremely helpful to have the ins and outs of the work being completed explained to you and these fellows did that throughout the project. The lead technician, Bryan, pointed out several concerns related to my HVAC ductwork that I would have not been aware of otherwise and I'm very appreciative that he took the time to show me this even though it was not part of the project. The attention to detail was above and beyond! Thanks to these gents for getting the job done to my utmost satisfaction! Please share with the supervisory team.
Nathan H. of Richmond, VA
Monday, May 21st
Total testimonials : 73