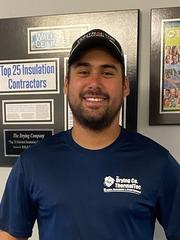 Daniel has been part of The Drying Co. Team since 2019. He has a background in installing a variety of insulation materials including fiberglass and spray foam and working in crawl spaces. Daniel is certified in SPF by Lapolla Industries.

Daniel specializes in installing Spray Foam Insulation in attics, basements, crawl spaces, and walls. He enjoys being able to install quality work and deliver solutions to our homeowners that make them more comfortable in their homes, as well as being recognized for a job well done.

Customer Reviews
About Me
View all Reviews
Testimonials
from customers I've helped!

Cutting Off The Outside Influence in a Louisa, VA...

Sealing Off Moisture from a Glen Allen, VA Crawl...